Taken from the Palace Shield Centenary Brochure in 2002

Congratulations to the Palace Shield on attaining its century and Blackpool Cricket Club is proud to have been associated with it for most of those 100 years. Indeed, after St Annes had won the inaugural competition in 1902, Blackpool were the second winners in 1903. They won it again two years later but success was denied them then for a further 28 years. It was 1933 when the club next won the trophy and that was the last time the senior competition has been won by Blaekpool. However, success in the ‘C’ Division was forthcoming in the 1970s and four wins, three of them in succession, was the result. 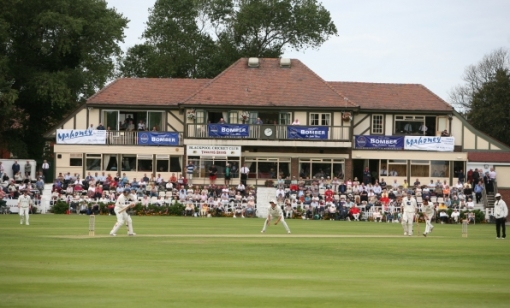 But cricket was being played in Blackpool many years prior to the formation of the Palace, or Alhambra as it was then known, Shield, which was the first competitive cricket played in the Fylde area. The games prior to 1902 were so-called ordinary fixtures, friendly games as they might now be known, and Blackpool started playing such games as early as 1879. It was in that year that cricket joined with the winter sport and the very first joint Blackpool Cricket and Football Club was founded.

The club was short-lived and folded after 10 years but it was not long before another Blackpool Cricket Club, this time independent from the football club, was formed. A professional was employed even in these early years and games were played at Raikes Hall and the Athletic Grounds before a more permanent home was taken at Whitegate Park, now Stanley Park. The games were, however, still only friendly games and it was not until 1920 when a senior Blackpool team joined the Ribblesdale League that the competition became more serious.

Blackpool at first found life in the Ribblesdale League a little difficult but, after a second place finish in 1923, the title was won for the first time in 1924. This was to be the first of 11 championships over the next 27 years and in addition a team named Blackpool Services, comprising forces personnel who were stationed in the town, won the title three times in the four years that they competed.

Blackpool had some excellent professionals during this period including exLancashire players Peter Fairclough and Steve Preston, former Nottinghamshire and England fast bowler Harold Larwood and Sussex ace Jim Parks. But the club, under the early patronage of Sir Lindsay Parkinson, could also boast some very strong amateurs. There was former Lancashire and England player Cecil Parkin, who took 221 wickets at fewer than 10 runs each in a three-year stay at the club. There was Australian fast bowler Ted McDonald, landlord at the Raikes Hotel, who was with the club through the early and mid-1930s and who regularly ran amok amongst Ribblesdale League batsmen. While he was in the side, Blackpool also fielded two former New Zealand Test players, Stewart Dcmpster and Ken James, and Dempster broke the League batting record in 1933 with 1,025 runs. His average of 134.3 was also a record and is still second best in the League, beaten only by Leslie Warburton’s 193.7 in the 1949 season.

The Dempster record aggregate only lasted four years before it was broken by another Blackpool amateur. His name was Joe Massey and he, too, had played some first-class cricket. He scored 1,031 runs in the 1937 season, a record that stood until 1949 and while he was at Blackpool he was regularly the club’s leading run-maker. And Blackpool’s leading wicketkeeper in the 1920s and 1930s was also an ex-Lancashire man. He was Johnny Whewell who was occasionally called back to the County side when they were short.

By 1951 some Ribblesdale League clubs wanted a western section to the League but as the executive would not see their way to agreeing to such a move, a number of the clubs broke away and formed the Northern League for the 1952 season. Blackpool was one of those clubs and found itself successful in the early days thanks to the efforts of one of the greatest club professionals ever. Bill Alley was an Australian who had spent some years at Colne and he joined Blackpool in 1953. He remained four years and scored an incredible 19 League centuries, 16 of them being undefeated, and scored over 5,000 runs with his record aggregate of 1,345, at an average of 149.44, in 1953 standing for 41 years. He also took a good haul of wickets with his medium pace bowling.

Blackpool had great success in the Northern League, both with the first team in Division One and with the second team in Division Two. The First Division League title has been won on many occasions, the last time being in 1990 when Blackpool had a highly successful season all round under the captaincy of Tony Hesketh while the Second Division was last won in 1995. Blackpool have also won the National Knock Out Cup, the Lancashire Cup and, at one time or another, the various League cups.

There have been a string of great Northern League professionals down the years at Stanley Park. These include Hanif Mohammad, Cammie Smith, Collis King, Maninder Singh, Ritchie Richardson and latterly seam bowler Marcus Sharp who has already taken 200 League wickets. A club cannot run without its amateurs and there have been many very good ones at Blackpool. Gordon Edmundson, Norman Langfield, Arthur Laycock, Robin Hood, Tony Hesketh, Ray Berry, Robin Bracewell, and David Higham are just a few who have graced the game from Stanley Park and also for Palace Shield clubs.

And the evergreen Martin Pickles continues to score runs and, amongst the 10,000 or more he has scored, are the 917 in the 1991 season that gives him the amateur batting record at the club. The amateur bowling record belongs to West Indian Donovan Malcolm who took a phenomenal 90 wickets in the 1982 season. Cecil Parkin once took all 10 wickets in a Ribblesdale League innings for only 32 runs but in modem times it is David Newton with 9-30 against Morecambe in 1981 who holds the record.

The facilities at Stanley Park are second to none and spectators are most welcome there at any time for whatever game is on offer. And that often includes Palace Shield games where the excitement can be just as great as in a Northern Premier League match