Another miserable Saturday ended with White Coppice’s game against Garstang 2nds predictably being rained off after 9.4 overs with both sides picking up two points apiece.

I’ve lost count of the number of wasted days I’ve endured over my career because of the weather so I decided to keep a diary of the latest  washout weekend to demonstrate the idiocy of being a club cricketer.1

6am, Saturday August 20th:  I woke up nice and early and could barely hear myself think because of the sound of the rain hitting the conservatory roof. Checked my iPhone weather app and there’s a 95 per cent chance of rain in Garstang. I’ve worked out I need 860 runs from a maximum of four more knocks to reach my target of 1,000 runs this season. Praying for a miracle – and not just for the weather!

12.20pm: As I leave the house my wife says I can join her at IKEA if my game is called off. Don’t think so.

12.35pm: Bombing up the M6 in driving rain when I suddenly remembered I hadn’t put my kit in the boot. I’d put it in the garage in order to pick up a TV from my mother-in-law’s on Wednesday and forgot to put it back. Came off the motorway at the Tickled Trout to head home. Really miffed off now.

1.30pm: Arrive at my destination after getting lost in Garstang’s one-way system. My overworked windscreen wipers are finally given a rest.

2pm: Miraculously the rain stops and the covers are pulled  back to reveal a rock hard wicket. Captain Tony Moore loses the toss again and we’re invited to bat as the game is reduced to 37 overs-a-side. I’m due to come in at number four so have a knock-up.

3.15pm: Kyle Dixon smacks 43 not out as we reach 59-0 off 9.4 overs. Garstang’s 1st team return from a rained off game at Whittingham & Goosnargh. Despite the efforts of the umpires a heavy shower forces the players off.  The bonus is Garstang reserves were playing Coppull reserves in a game of football that we were able to watch from the balcony of the clubhouse. Garstang’s goalkeeper looks older than me!

4.15pm: With no sign of the rain ending Garstang’s cricketers suggest an early tea. With the game reduced to 27 overs-a-side Tony Moore decides to reshuffle the batting order. “Wayne Dixon and Marcus Eaton will go above you Magsy,” he said. “Was it the way I walked round the pitch that prompted the demotion?” I joked. Decided to take my box off.

5.30pm: After paying my match fee of £7.50 without facing a single ball the captains made the sensible decision to call it off. I’m unavailable next week so I now need 860 runs from a maximum of three more matches. I’ve batted four times since May 28 due to the weather and unavailability. I don’t care as long as we dodge relegation.

6pm: Phoned Mrs M on the way home on loud speaker. “How did you get on?” she asked. “Called off after 9.4 overs,” I replied. “Poor daddy,” replied one of my daughters. “He’s given up his whole day and he doesn’t get to play.”And with one withering sentence the futility of another wasted Saturday was laid bare. 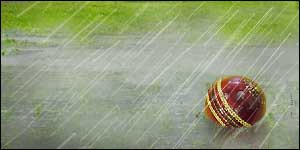 More in this category: « Cricket can be a cruel mistress I'm not ready to umpire (yet) »
back to top