News from the Junior Section

Only minimal advice (from coaches) is allowed from the U12s age group upwards.
The coach should only relay messages when a time out is called; 1 time out per team per innings is allowed but for a maximum of 2 minutes only.

The players need to be given the opportunity to learn the art of captaincy. The coach might need to advise the captain about the 8 players bowling 2 overs from time to time and has to step in if a fielder is standing too near to the batsman..

I have had reports where umpires / coaches are constantly making changes to the field placings in U12s and over age group games. This has to stop IMMEDIATELY please.

Coaching is allowed in U10s and U11s games but again should be kept to a minimum.

Deadline dates: A few of you have already made enquiries about extending deadlines:
NO DEADLINE WILL BE EXTENDED.
The deadline dates are:
U11s Weds 28 June
U10s Weds 5 July

All other age groups 31 July.

Obviously the 4 teams qualifying for either U10s or U11s Finals Days, will be the 4 teams (top 2 in each division) as of the original deadline dates.

Teams in a position to qualify for either the U10s and U11s Finals Days, must ensure that all of your scorecards are fully completed. Any scorecards where you have an UNSURE player(s) showing on scorecards must be corrected IMMEDIATELY.

This also applies to all other age groups. A lot of unsure players are showing on scorecards across the age groups. The winning team can only complete scorecards fully when all players have been properly registered. Where there are UNSURE players on scorecards the offending club (not necessarily the winning club), will be FINED ACCORDINGLY.

The venue is STILL TO BE CONFIRMED.

Can players please advise whether you are available or not by email please.

Can players arrive at the game wearing a shirt and a tie please.

Some of you might have a junior club match in the morning.

If you have please let me know, so that Colin can is aware that  you might be a little late in arriving.

Can players please advise whether available or not by email please. 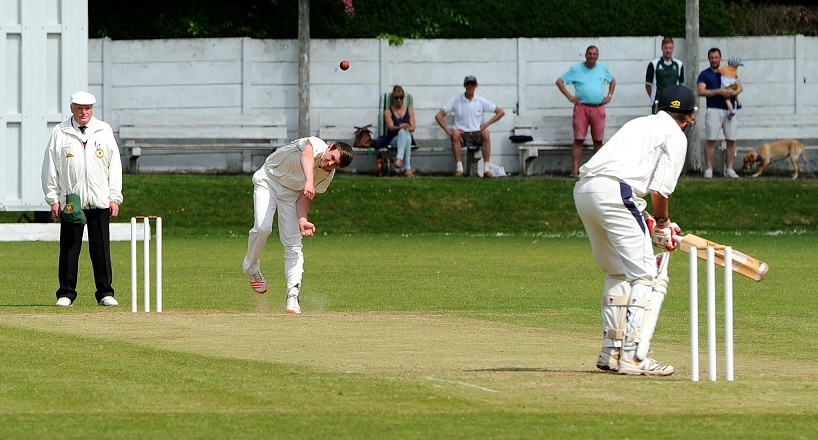 Another former Palace Shield Junior has made his Lancashire 2XI debut as Ed Moulton took the field this morning.

Ed made his Palace Shield debut at 8, and played thoughout the junior competitions for Chorley CC.

The game is a three day championship clash against Northants at Aigburth, Liverpool. At stumps on day one, Northants were 17/2 in reply to Lancashires 321 all out. Batting at number 10 Edwin 4 off 13 balls.

Tomorrow may prove the crucial day for Edwin and Lancashire, as they look to make further inroads into the Northants batting line up. Here's hoping Edwin can chip in with a few wickets and impress on his debut!

You can follow the game, with video highlights, on the link below. Best of luck tomorrow Edwin and congratulations from all at Chorley CC. 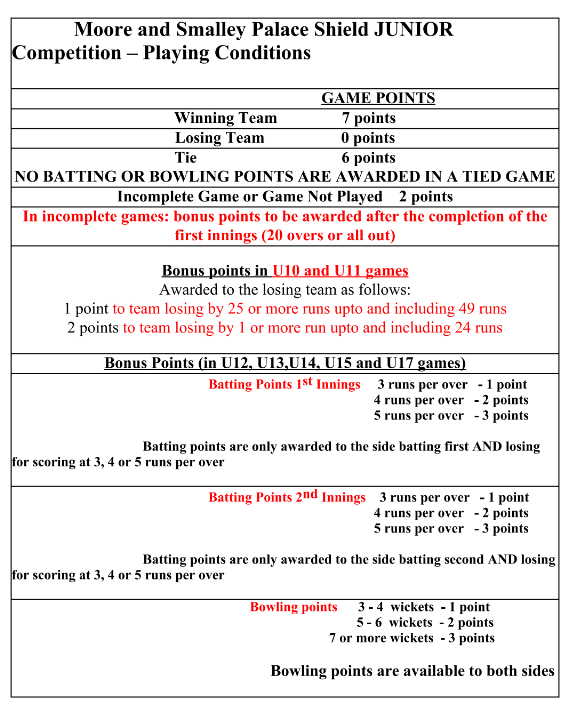 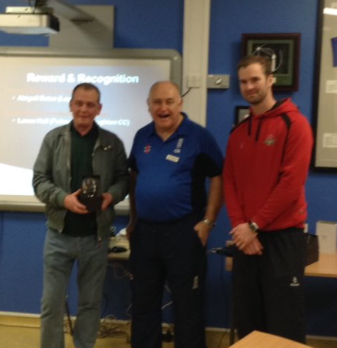 Lance Hall of Fulwood & Broughton Cricket Club was rewarded at the Lancashire Coaching Association Annual General Meeting. The LCBCA were asked to nominate coaches as part of the ECB Reward and Recognition process.

Update from the LCB Coaches Association

Happy 10th Anniversary to Us!

2017 sees the 10th Anniversary of the Lancashire Cricket Board Coaches Association and, we decided to mark the occasion by combining our Annual General Meeting on Saturday 11th March with a Batting Workshop presented by Tom Smith, former Captain of Lancashire CCC.

Over 30 Coaches were in attendance for Tom's workshop on Power Hitting. Tom talked through his own experiences as well as showing the drills which have helped him as a batter in the modern game.  Tom spoke about building confidence through drills and recognising that not all players are the same, not everyone will subscribe to a 'text book model' but may still acheive an outcome.

The Coaches got to try out Tom's 'Top Tips' for themselves by working in small groups to develop their own knowledge and confidence to use these techniques themselves when coaching.

Following the Batting Workshop there was a Q & A with Tom which showed an insight to himself as a player and where his aspirations are as a Coach.

Every year the ECB run a 'Reward & Recognition' Programme and as a Coaches Association we are asked to nominate in 3 x categories.

Our nominees for this year are pictured below, receiving their Lancashire Awards from Tom Smith and LCBCA Chairman, Richard Dearden.  All our nominees work extremely hard within cricket, giving their time, energy and experience for the promotion of the game and to help players improve.

The Lancashire Award Winners will now go on to represent us within the National Reward & Recognition.  Who knows, one of them could even win the overall National Award?!!  Good Luck!!

This Award is in honour of our coaching colleague, Jim Kenyon, who sadly passed away a few years ago.  Jim spent many years dedicating himself to coaching and coach education within Lancashire and greatly impacted on coaches and players alike.  As a Coaches Association we bestow this award annually on colleagues within Lancashire who have also dedicated their time and energy to coaching and coach education.This year there are joint winners, David Reynolds and David Davies, who have worked together in the Merseyside area for a number of years.  Congratulations Dave & Dave, two very worthy winners!

There will be a LCBCA Workshop ‘Fundamentals of Spin Bowling’ held at St James High School, Bolton, from 7:00pm until 9:00pm. Booking details will be released soon!

Over 20 of our Club Coaches benefitted from a Workshop arranged by the Lancashire Coaches Association.

The Coaches were treated to masterclasses led by Lancashire Captain Steven Croft and Coach and Data Analyst Chris Benbow. 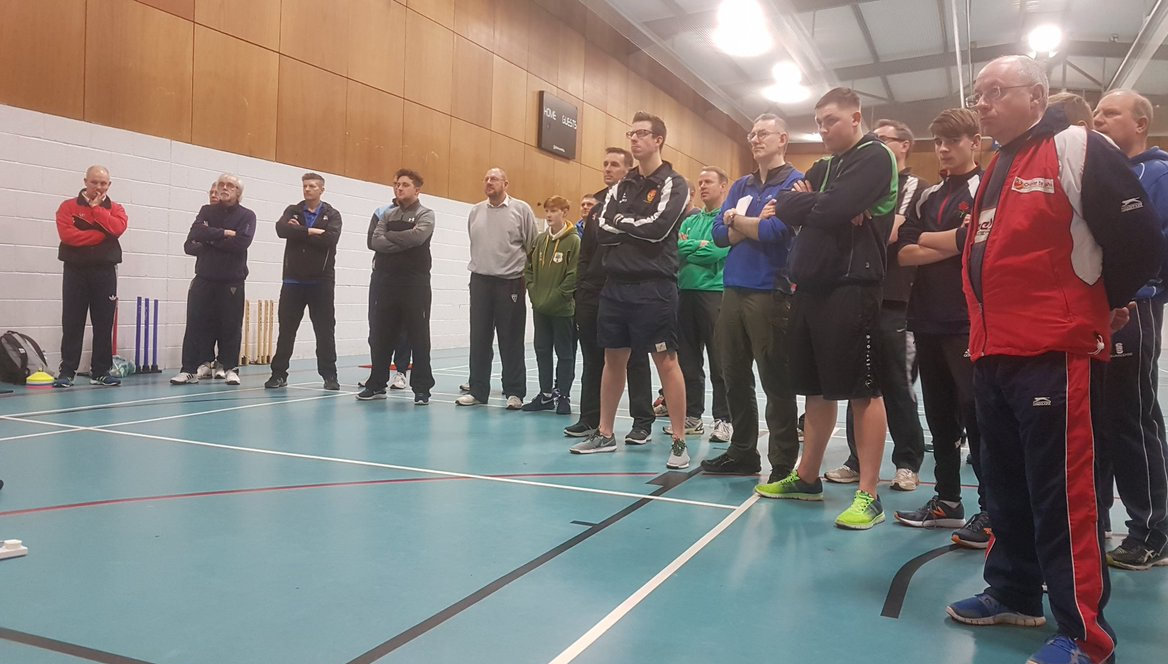 Gents
Please find attached minutes from the junior meeting this week.
Clubs need to start arranging junior fixtures (if they haven't already started). A couple of clubs have already completed arranging theirs. Once you have arranged all (or most) of your fixtures please send details to me, so that the fixture dates can be added onto the website.
I need team managers details as well by 10 April at the latest. I need team managers  name, mobile number and an email contact, just in case I need to contact them.
Any club wishing to play any overage players MUST seek permission before they play. As usual I will issue a list prior to the start of the season (a number of clubs have already sent in some requests).
Now is also the time to make sure that ALL your players are correctly registered online.
Regards

John Conway, chairman, introduced Peter Metcalf who explained about the momentous decision at the senior SGM on 27.2.17 where proposals were voted in for the linking of the Palace Shield and Northern League. Three rule changes were passed: Voting Rights, Competition Structure and Promotion/Relegation. Further information can be found on palaceshield.play-cricket.com.

Peter thanked the senior executive for their hard work and informed the meeting that the ECB and LCB were delighted by this development.

Roll Call: All clubs present except for:  Chorley, Freckleton,  Hoghton, South Shore and Whittle& Clayton-le- Woods. Chorley , South Shore and Whittle would be fined in accordance with the rules. Freckleton and Hoghton , at present, have no junior section and would therefore not be fined. Both would still be invited to attend meetings but would not be fined if they didn't attend.

Coaching Course: Chris Gunn informed the meeting of the coaching event at Myerscough College Sports Centre, 4.3.17 from 12 -3pm. The course includes: batting against spin, range/power hitting and fielding. See PS website for more details. The course is fully booked up.

All Stars Cricket for 5-8 year olds was being introduced to encourage children and parents to become involved in clubs. Parents would be trained to run the introductory courses. Concerns were raised regarding DBS for parents running the courses. John Conway reiterated that the involvement of parents was most important for clubs and they needed to be targeted as future coaches/managers.

Finance : Adam thanked Duncan Cowburn for obtaining 3 lots of sponsorship for the junior section. £250 for each of the following age groups: U10s, sponsor, Energi Trampoline Park; U11s, sponsor, Walker Fire and U17s sponsor Bill Monitor. Adverts for all 3 companies would appear in the PS handbook and Alex had already added a piece on the website.

Discipline: Nothing to report.

Development and CWO issues: Trevor reported that there were still coaches needing to do the First Aid course.

He also raised concerns about the importance of coaches and managers having DBS, First Aid and Safeguarding. If people do not have a DBS they cannot coach/manage. Trevor would be sending out a list to club secretaries and welfare officers as to who needs what certification soon.

Fixtures, Results, Registrations: The fixtures  have been completed. Mark thanked all the clubs for sending in their teams before the deadline of 14.2.17. Most changes had been made to the U13 league. Clubs were reminded that once a date had been set for the match, it had to be played on that date. If it rained, then each team would have 2 points each. If it was just showery on the day then 15 overs, per team, could be played. If the first innings was completed the bonus points would be added to the 2 points.

The U13 Plate carried over from 2016 matches between Chorley and Fleetwood and Garstang and New Longton need to be played. This years U14S who played last year are eligible to play.

The U13 UCLAN competition would be on 23rd July. Teams are Chorley, Fulwood, Kirkham, Leyland, Longridge and St. Annes.

The U10 – 6 a side competition would be on 16th July at Blackpool. Mark would be sending out an email soon. As many entries as possible needed.

There was a reminder that juniors cannot play district and club cricket on the same day. If club fixtures had been arranged on the same day as a district match or inter-league match then the match could be rearranged.

Clubs were asked to inform their coaches/managers of the new rules.

Correspondence: Hoghton, unfortunately, had withdrawn from the junior leagues. The club was liaising with Gregson Lane for their older players to play in the Gregson Lane junior teams. This situation seems to be common round the country. Since the meeting Hoghton had been in touch and were hoping to raise sufficient players to play some friendlies later in the season. Clubs asked  to support Hoghton in arranging friendly fixtures. Penwortham have arranged 2 friendlies and Walton le Dale also are in touch with Hoghton.

AOB: Alex mentioned the new ( though not yet out) playcricket scoring app. Clubs were reminded if they would be using the app they also had to use one scorebook.

Mark would be sending out the U10/U11 scorecards by email.

Mark thanked Antony Wilson ( Kirkham) for taking over  as U12 inter-league manager. If any coach is able and willing to assist him with the team, please contact Mark asap. Colin is still running the U14s. There are only 3 proposed Inter League fixtures at both age groups. 18/6, 16/7 and 30/7

Also - Please see below the initial dates for the Lancashire Partnership District Fixtures. Fixture Co-Ordinators should look to avoid these dates when arranging fixtures.