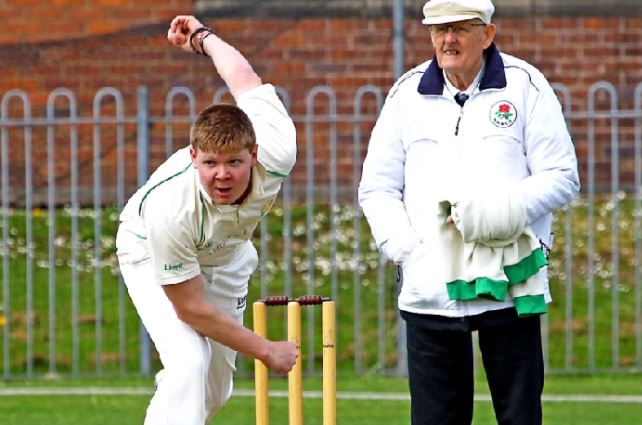 On a lukewarm Saturday afternoon down at Woodhill Lane, once again with the wind swirling, Morecambe hosted New Longton in the Moore and Smalley Palace Shield and were winners by eight wickets.

Morecambe captain Ryan Pearson won the toss and elected to bowl first on what looked to be a very good Woodhill Lane wicket.

With Lloyd Smith (2-21) and Jamie Cassidy (0-36) continuing to open the bowling for Morecambe CC in the absence of Louis Backhouse, they started well as a pair and brought pressure onto the batsmen in the first 15 overs.

Smith was the man to take the first two wickets, one caught excellently in the gully region by Alex Briggs and the second one bowling the second opener after a little bit of movement in the air.

The New Longton batsmen then began to build a partnership in the form of Adam Gillibrand (24) and Ben Simpkins (23), who began to put the pressure on the bowlers with good rotation and run scoring between them.

It took the first change bowlers in Baker (3-59) and G Cassidy (5-30) turning the screw to take the next four wickets in quick succession.

G Cassidy bowled fantastically well considering he injured his knee diving in the outfield and was the main man with the ball on a wicket that offered nothing for the bowlers at all.

Chris Hands (57) was the top scorer for the batting side and helped take his team to a respectable score of 149 all out with some good positive stroke making with the help of some lax fielding by Morecambe. However, some poor bowling, allowed New Longton to post a score that could have been tricky to chase.

The second half of the game started excellently for Morecambe with them racing to 100-0 by the end of the 21st over.

There was some good running mixed with delightful strokeplay by stalwart Mark Woodhead (36), who was playing in his own way, striking the ball over extra cover and midwicket before launching one out of the ground straight from a slog sweep.

He was accompanied fantastically by Sam Owen (70) with his picturesque strokeplay a joy to watch from the sidelines, including some sumptuous back foot cover drives and some front foot drives through mid wicket and mid on which put Morecambe into a position where they were never going to lose from.

Woodhead, going for one shot too many, was caught at mid on, bringing captain Ryan Pearson (36no) to the crease.

Pearson also joined in with some delightful strokeplay and accompanied Owen well until he was caught trying to flick one into the leg side with 15 runs to win.

Not to worry, Pearson finished the game within an over putting one over the fence straight as Woodhead had done before following this again to finish the game with 18 overs to spare.

A good performance by Morecambe with lots to improve on but a day where the batsmen played well and won the side the game.

Morecambe travel to Croston on Saturday, May 11 in what should be a tough game for the Woodhill Lane outfit against a Croston side looking for promotion after going close last year.

More in this category: « Lancaster up to third after victory over Penwortham LEP : Moore and Smalley Palace Shield weekend round-up »
back to top