Following a Zoom meeting with the Northern League, we have now formulated some options for this season depending on when we might get
the go ahead.
Please look at the attached with particular reference to the potential competitions we are considered should a reduced league programme not be possible.  Please can each club consider these matters and then let me know:

1.    Whether you would agree with the competitions as proposed.

2.    Whether your club would be wishing to take part and, if so, would
it be all teams?

3.    If you are uncomfortable with the suggested level for your team  -
perhaps you are aware of a number of players who could be missing.

4.    Whether there are an potential ground issues.

5.    Whether you are agreeable to accepting clubs from other
competitions if they are a suitable competitior both ability-wise and
fit in with the geography.

6.    If you would be interested in entering one or more team in a
similar competition on a Sunday for those not able to play on Saturdays
- i.e. replacing our Sunday competition but also some clubs with 3rd
teams may not wish to run 2 grounds so may be better with the side
playing on a Sunday.

We realise some of the answers may be tentative at this stage but we
want to be in a position to react quickly if and when the go-ahead is given.

The meeting was held to look at options for the rest of the 2020 season in view on the ongoing Covid-19 situation.  Both leagues has sent various messages to clubs and had sought feedback.  The ECB had issued a statement on Wednesday 10th June with the intention of clearing matters up but it still left many questions open.  The ECB had stated that no county (i.e. domestic) cricket would take place until 1st August and that recreational cricket (i.e. at club level) was on a different time pathway.  However they had not stated whether this was to be before or after the domestic game.  They had also intimated that we may need to stage “adapted” games but it was unclear what those adaptions might be.  Some of the issues were created by the social distancing measures currently in place at 2 metres but there seemed to be a push from many sources to reduce this to 1 metre which would affect staging of club cricket.  If and when we get to play cricket, there could still be issues with travel, clubhouses etc.  Furthermore, should cricket be resumed and a player be found to be Covid positive after the game, we could find that one or more teams may have to socially isolate for a week or two.  This could mean that, after any resumption, teams suddenly find themselves unable to play for a couple of weeks.

Therefore, looking to the future, the meeting decided:

1.         Regardless of the format, number of games possible and start date, it was felt that, given all the issues highlighted above and especially the one where teams could have to isolate following an infection, there would be no promotion or relegation this season either between the Northern League and Palace Shield or within the Palace Shield.

2.         The second half of fixtures start on 4th July.  Whilst it was highly unlikely that we would be able to restart cricket by this point, it had not been entirely ruled out.  Therefore, until this happened, 4th July would be retained as a potential restart date.  However, if cricket were to be allowed from this date, we would revisit the issue of whether to resume the half season programme for the normal trophies based on any restrictions still around such as playing conditions, travel, clubhouses etc.

3.         If a resumption is not possible on 4th July but is allowed on 11th or 18th July, a half season would be possible by extending the season until later in September.  In addition to the issues that would affect a 4th July restart, there would also be the matter for groundsmen to be able to complete their autumn work in time.  Some clubs who share facilities with other sports may have issues with an extension.  Therefore, if it is possible to restart at this point, we would again revisit the situation to take into account any restrictions with the addition of the ground issues.

4.         It was felt a more likely scenario is that cricket will be allowed from early to mid- August.  With this in mind, various options had been considered.  Overall, it was felt that, if we could get regionally based groups of 6 teams with relatively comparable abilities, we could create one-off competitions.  Each group could play 5 matches leading to quarter-finals (if there was time) and semis and a final.  This would work starting on 1st August but also be possible from 15th August if the knock-out games took place towards the middle and end of September.  This would be done on the following basis:

4.1       A table had been drawn up with 4 levels.  Level 1 would be Northern League teams and those in Palace Shield Premier.  Level 2 made up of Palace 1A and 1B.  Level 3 from Palace Shield 2 and 3.  Level 4 from Palace Shield 3 and below.  The top 3 levels were split into 4 groups of 6.  Level 4 had more teams but, it was felt that a number of teams would drop out for whatever reason and this would be resolved by the time any play took place.  The table is in the spreadsheet plan.docx.

4.2       Some teams may wish to drop out completely for whatever reason and this was acceptable.  If a club wanted to go and play elsewhere for ease of travel or other reason, there would be no issues.  Regardless of what happens, everyone’s status will be retained for 2021 at 2020 levels.

4.3       Some teams may feel uncomfortable at the level allocated as they feel they will lose more players than the average.  If this is the case, it will be discussed with them but they will be allowed to drop to the level below.

4.4       Clubs in our area but currently in other leagues may be interested in joining us for this competition only.  If gaps start to appear, we will speak to the other leagues and then the clubs to decide if they come in and, if so, at what level.

4.5.      At the lower levels, clubs with 3rd teams may not wish to open up the second ground and may prefer to put these teams into a Sunday competition.  We would consider setting something up on similar lines to the Saturday competition with the proviso it is intended for those unable to play on a Saturday.

4.6       Some grounds may not be available for the latter dates in the schedule especially if we get a later start.  So, all clubs will be asked if their ground is available the whole time, some of the time or not at all.  Then we can build up a picture of how the groups will look (which will no doubt be much changed by the time we start) and how the fixtures can pan out.

4.7       Ideally, the length of game will be unrestricted so we would intend to play 40 over win / lose cricket with normal restrictions on bowling at 8 overs.  Rob Hales will draw up some standard generic rules for this.  If 40 overs is not possible or desirable due to restrictions, we would consider a reduction to 20 overs.  However, it was felt that we needed to get as close as possible to “proper” cricket.

4.8       Trophies would be made available to the winners at each level but these would not bear the historical names of trophies such as the Readers, Meyler, Loxham and Crabtree Cups.  Medals / individual trophies would be provided for the finalists with the cost split proportionately between the NL and PS.

4.9       This would be red ball cricket with white clothing regardless of the length of game.  Ideally clubs would be able to use old stock of balls but we could go to Readers for a portion of this year’s order.

4.8       Fulwood and Broughton and St Annes had intended to play the 2020 season with a locally based professional.  Whilst no payments would be allowed to players, these two players may still wish to play.  However, some may see this as an unfair advantage.  It was decided that any decision on this should be left to the clubs who will be playing in level 1 once this is known.

So, in summary, the position at the moment is:

No promotion and relegation

A possible half season starting on 4th to 18th July if this is allowed and the restrictions impose allow for a meaningful competition.

A more likely scenario is up to 4 competitions based on local-ish groups of 6 starting in early to mid-August.

Whatever the format decided on, no club will be penalised should they wish not to compete and all entries for 2020 will continue through to 2021. 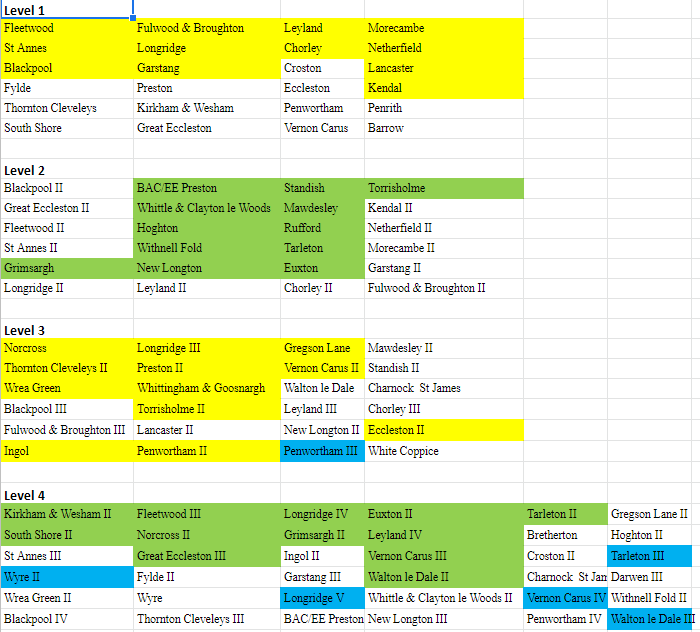 More in this category: « Graham (Chubby) Lee Statement »
back to top