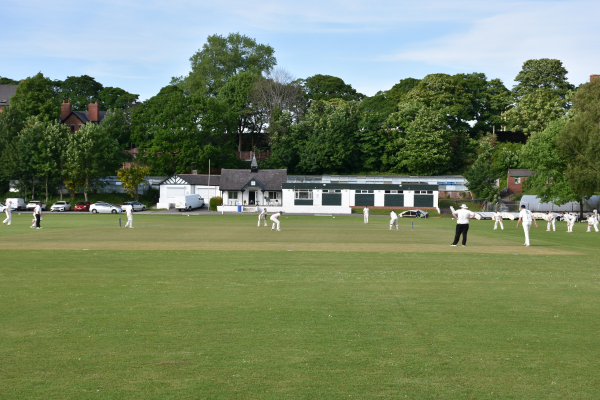 Today’s review has to start at Mad Nook where the Shore pulled off the result of the day by beating 3rd place Penwortham by 1 run to earn their first victory of the 2021 season.  Shore won the toss and elected to bat on a nice warm Saturday. Captain Max Cowell – Makin led from the front scoring 60, Ash Pereya added 24 and Aravindan Rajasekar added 34 no as they totalled 165 from their 45 overs. The visitor’s wickets fell regularly and Penwortham will be very disappointed to be bowled out 1 run short for 164. Many congratulations to the Seasiders who’s win lifted them off the bottom.

A lovely day saw the Chairman attend this fixture. Great Eccleston won the toss and like many clubs elected to bat. A steady start with good contributions from Salar Butt (63) Matt Moat (31) Adam Green (42) and Richard Booth took GE to 241. The late runs seemed to dispirit the Preston lads. After the interval, a very good bowling stint from Phil Booth with figures of 7-1-4-15 was topped by Will Proctor’s outstanding 8-1-6-18 to clearly win the Player of the day award.

The hosts elected to bat and Michael Brooks continued his fine form with 66 and Andy Hogarth scored his best score of the season with 50 no whilst brother, Jaime pitched in with 46 no. K&W scored 229 for 5.  Gary Collins was the pick of the bowling with 10-3-3-39 whilst Brian Carr added 5-0-2-31. Kirkham bowled well and had reduced Barrow to 173 for 7 and must have fancied their chances but batting at number 9 Sam Henderson scored 78 no off 59 deliveries and took Barrow to a 1 wicket victory.

South Shore’s heroic feat could not be matched by Fylde. Again the hosts won the toss and batted scoring 218 from their allotted overs. Sam Hall was the top scorer with 40 no whilst the bowlers shared the wickets. Fylde were bowled out for 125 in just over 32 overs. Nathan Winward top-scored with 38 whilst Bruce Glendinning returned 11-1-3-34. Penrith remain in 2nd place only 4 points behind Vernon Carus.

Croston won the toss and elected to bat. But a speed attack of Calum Holland with 10.3-3-3-13 and Max Livesey with 12-5-2-20 proved too much for Croston’s batting Ian Dickinson (38) Lee Childs (24) and Conrad Kearton (24no) offering the only contributions of note. They ended their innings on 129 all out. Vernon’s strolled to victory with Mathew Stevenson scoring an unbeaten 101no to guide Vernon’s to victory.

All teams winning the toss elected to bat and Thornton Cleveleys were no exception.  Some strong scoring from Josh Vincent (38) Jake Apperley, (44), Josh Sackfield (59) and Danny Howard 89 off 44 balls took Cleveleys to an imposing total of 282 not helped by Eccleston bowling 41 wides.  Sam Bromley with 45) and Adam Smith (54)were the only two contributors with Eccleston bowled out for 176 with a very useful spell of bowling from Josh Rollinson taking 5 for 54.

More in this category: « Preview 5th June 2021 Lancashire Cup »
back to top