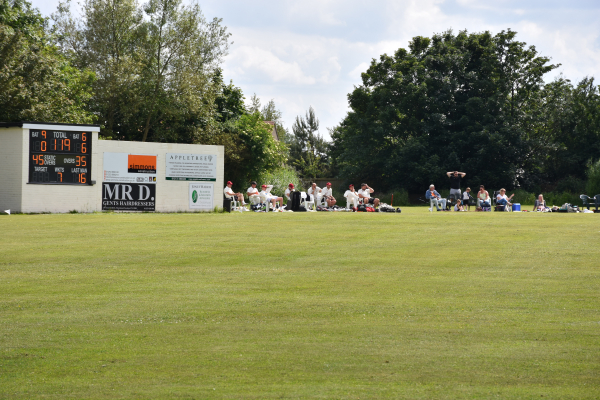 K&W won the toss and elected to bat. They could not take advantage as Wilson & Patel took early wickets. It was necessary for Coach Liam Castlellas (31)  & Wicket Keeper Tait Roberts-Hodgson (21) to provide middle-order support. The tail couldn’t add many more and Kirkham were all out for a disappointing 103. Neil Patel with 4-27 and Captain Ash Billington with 3-15 starred. A fine innings by Jack Dillon with 65 no led to a 6 wicket win for the visitors.

Ian Dickinson won the toss and the visitors batted. The bedrock of the Croston innings was a splendid 68 by Joe Barker. Jack Marsh & Konrad Kearton added to give a total of 156. Penrith were missing Hart but James Ellis with 4-44 and Greg Cameron 4-47 held Croston to what appeared to be a gettable total. However with the exception of Greg Cameron with 44, the batting of the home side offered little resistance to the bowling of Joe Barker with a magnificent 7-22 ably supported by Jack Marsh 3-48. Penrith were bowled out for 72 giving Croston a win by 84 runs. An unexpected win perhaps inspired by the rare appearance of Tanno Tomlinson. David was out shone by young Joe Barker who enjoyed a tremendous day.

A very close game at West Cliff, where the visitors batted first and good knocks by Greg Reynolds (43), Cameron McDougall (46) and Jack Singleton (21) gave Barrow a score of 168 ao. Preston used six bowlers four of which took two wickets apiece. A reasonable start by Imran Jethva (21) and Ajaz Khan Pathan (24) supported by Sajid Nalbandh (39) and Imran Pariyezwala 34no took Preston close, however, the last pair fell with the home side just 4 runs short. A decent performance from an indifferent Preston team.

Great Eccleston won the toss and elected to bat, a fine opening stand of 62 by Will Thistlethwaite (33) and Jeremy Whittle (33) followed by Captain Joe McMillan who scored a splendid 100no he was ably supported by Joe Davies with a fine 68no gave an imposing target of 256 for 3. Ash Perera with 1-17 being the best of the bowling. Shore battled well and captain Max Cowell – Makin with 61 and several others all contributing double figures GE could not bowl the Shore out Gt Ecc winning by 70 runs with Will Proctor finishing with 4-48. Brave effort from the Shore.

On a fine sunny day, Cleveleys elected to bat and got off to a good start with  Josh Vincent (17)  and Jon Eade (48) looking comfortable. But some very steady bowling from Fylde stalwart Danny Smith (4-42) kept the home side in check. The loss of three batsmen including Captain Danny Howard for 0 knocked the heart out of the innings and Cleveleys ended with a gettable 134 all out. Jon Bass opened the bowling with quite a hostile spell and took two early wickets but a good stand by Ben Anderson (59 no) and Craig Allison (35) broke the back of the chasing score winning by 4 wickets

Factory Lane saw Eccleston win the toss and elect to bat. They lost their Captain early but Tom Wilkinson batted well for 66 before falling to Joe Allen. Several others got into double figures but a total of 141 was probably below par. Jacob Holland starred with 4 – 33 off 15 overs ably supported by Joe Allen with 3-25. Vernon’s were missing Stevenson but Ian Dunn with 22 and Christian Ash with 26 set them on their way before both fell to the off-spin of Tom Wilkinson. Four others got into double figures but perished with a Stewart White returning splendid figures of 5-32. Vernon’s fell for 124 all out with Eccleston winning by 17 runs. A surprise defeat for the Premiership leaders.