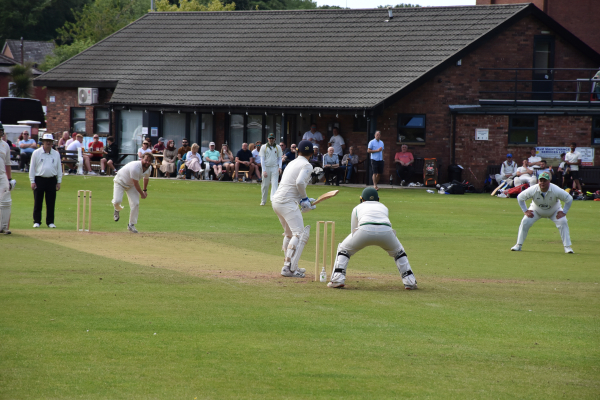 I was going to refer to this match as a local derby before it was pointed out to me that the towns are some 69 miles apart. Barrow won the toss and elected to field. They were quickly rewarded with the wickets of the top four Penrith batsmen with only 30 on the board. Captain Alister Craig stemmed the flow with 30 but they were bowled out for a disappointing 94 in less than 40 overs. Five bowlers all took wickets. Barrow made a worse start losing six for only 37 however a very good innings of 50 by Jack Singleton and 23 by Sam Hart took Barrow to a 4 wicket win. This enabled Barrow to overtake Penrith into 2nd in the league table.

Captain Ant Wilson won the toss and elected to bat at Croston. They lost Brooks early but Wright (18) & Sam Oldfield with a fine 56 gave the visitors stability before Castellas (38)  & Jaime Hogarth 33 no took K&W to a total of 189 for 9 in their 45 overs. Lee Childs with 4 for 13 cleaned up the tail. Max Harper (17) and restored opener Adam Sexton( 29) made a positive start of 37 for the 1st wicket. The middle order didn’t fare so well as Jaime Hogarth with 6 for 38 and Antony Harrison with 4 for 47 ran through the side to give the visitors a win by 49 runs.

Eccleston won the toss and batted first. Tom Wilkinson (26) and recalled Jaime Maitland (55) gave them a very good start with an opening partnership of 61. Steady scoring by the middle order with a season best 60 not out by Skipper Michael Atkinson took Eccleston to 230 for 6. Tyne Davis with 57 and Captain Max Cowell-Makin (18) gave the Shore a decent start. Amjad Mehmood with 30 took passed a 100. A very good spell by Nasaar Afsar with 4 for 28 and Stewart White with 2 for 42 saw Eccleston win by 50 runs. The loss leaves South Shore at the foot of the table some 16 points adrift.

After last weeks win at Cleveleys a confident Fylde put visitors Preston in to bat. Regrettably a poor call as Preston with good innings from Navazish Ali (45) & Imran Mehmood (52) and solid support from Sajid Nalbandh 38 and Zubair Patel 24no took the visitors to 222 for 7 in their 45 overs. Danny Smith and Usama Abrar took 5 wickets a piece but each going for50 plus runs. In reply only Captain Moore (200 and young Will Smith with 22 no  offered resistance. Perhaps a recall for veteran John Marsh A fine bowling return for Rizwan Patel with 7 for 30

Visitors Captain Danny Howard won the toss and inserted Great Eccleston. A good start by Will Thistlethwaite (19)  and Jeremy Whittle with 50 gave them  a platform however the loss of last week’s centurion McMillan (4) and Green (8) it required experienced Joe Davies to give  Eccleston a recovery with 64. The tail was cleared up by Jez Newman with 3 for 30 and Chris Hedges with 3 for 38. Gt Ecc finished on 155 ao in less that 36 overs. Solid knocks by Jake Appleby (21) and Howard (29) but a return to form for Josh Sackfield with 57 not out led Cleveleys to a 5 wicket win.

This is a local derby with only yards separating the two teams. Vernon’s won the toss and batted. They will be disappointed with their batting performance Ian Dunn (33) David Hankin (21) and Matt Timms with 28 the only real contributors. Vernon’s finished with a total of 121 in less than 40 overs. Captain Ashley Billington with 3 for 27 from 14 overs and the good young prospect Ryan Roberts with 4 for 21 did most of the damage. Martyn Brierley with 48,  Sam Ryding (18) before Ed Duckworth with 16 and Charlie Parker with 11 saw Penwortham home by 5 wickets

More in this category: « Review 2021 Palace Shield Survey »
back to top