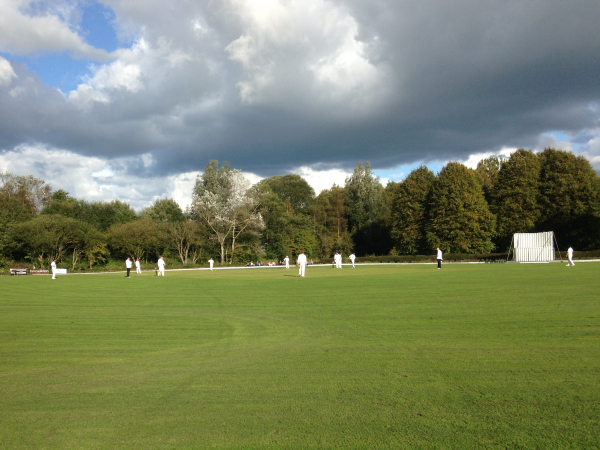 Some wet weather accompanied Saturday’s fixtures and the toss became a significant factor. At Kirkham, Antony Wilson won the toss and inserted visitors Fylde. Andy Hogarth opened the bowling and quickly removed opener Dan Smith. Fylde then put together several partnerships with Moore (40) Allison (20) Anderson (48) & Winward 38) giving Fylde a sound foundation but good bowling by Wilson (4-34) and Jaime Hogarth (3-65) took the heart and the tail was quickly cleared Fylde finished on 166 all out. Kirkham battled their way to 170 but lost 7 wickets in chasing Stephen Wright (25) Sam Oldfield (26) included 6 fours, Liam Castellas (25), and Jaime Hogarth (22no) the reliable Danny Smith with 2 – 42 off 13 overs was the pick.

At rain-affected Penrith visiting skipper Joe McMillan won the toss and elected to bat however Gt Eccleston did not make good use of the pitch being 125 for 9 in their allotted 39 overs. Only Salar Butt (21) and Richard Booth (22) getting into the twenties. A superb 6 -29 by Bruce Glendinning caused the damage. A sound start of 67 from Greg Cameron (46) and Dan Morland (27) took them halfway to the required total but some steady bowling by Joe Davies (4-47) and Phil Booth (2-37) caused a few jitters before Mark Vasey 16no and James Ellis 8no got Penrith home by 4 wickets.

An exciting game at West Gate saw Preston win the toss and bat first.  Tom Wilkinson (1-42) and Michael Atkinson (1-25) bowled tightly and only Imran Mehmood with a nice 51 and Zubair Patel (38) scored freely. Other wickets were shared but all bowlers going at over 5 runs per over. Preston reached 154 all out. Wilkinson started well (23) before being bowled by Rizwan Ali.  Matt Ashcroft similarly was batting well on 35 before being caught behind by the evergreen Charlie Williams. The returning Jordan Bentham scored 31 before a flurry of wickets left the game tied with Eccleston being bowled out for 154.

Croston were the visitors to Mad Nook where both teams are having difficult seasons at the foot of the league table. Captain Max Cowell-Makin won the toss and chose to field. Max Harper opened the batting and batted soundly for 58. He survived whilst the wickets of Sexton (15) Dickinson (12) and Barker (2) and Marsh (14) fell around him. Only Conrad Kearton with 33 significantly added to Croston’s score of 169 for 9 in their 45 overs. Michael Hall with 3 for 45 off 12 overs was the pick. Joe barker had both openers caught behind with the score on 19. Ash Perera battled through 37 balls for 19 but the Shore batting is brittle and they were bowled out for 86 in 25 overs. The remaining Marsh family member Jack took a credible 4- 37 off his 10 overs.  Stuck on the bottom of the table South Shore will need a change of fortune if they are to survive and not be relegated.

Thornton Captain, Danny Howard won the toss and invited Penwortham to make first use of the Illawalla pitch. Ian Walmsley is in fine form opened and scored another 58 to an impressive list of recent scores.  This young team are not yet consistent and only Maji Rajdeep (27) and Ed Duckworth (23) really added to a total of 148 all out. A score well below an expected total. Jon Bass took two early wickets (2-16) but Chris Hedges with 5-45 from 13 overs was excellent.  Opener Jon Eade added another 42 to some decent scores this season whilst Jake Apperley with an excellent 60 not out took Cleveleys home by 7 wickets. A good home win takes Thornton up to 5th in the table.

The fixture of the day took 2nd place, Barrow, to leaders Vernon Carus. Home Captain Bob Bridges won the toss and asked Barrow to bat. They faced a hostile attack in Jacob Holland who returned a very fine 6 for 34 off 14 overs ably supported by Max Livesey (1-24) and matt Simms (3-28). Only Jack Singleton with 34 and Sam Henderson with 24 contributed to a poor total of 99 in just 33 overs. Sam Henderson had two early successes but Jaime Rigby with 31 and Ben Duerden with 38 scored the bulk. Vernon’s won by a comfortable 6 wickets and remain top of the table. The question is starting to be asked whether Vernon’s would take promotion should they finish in the top two.