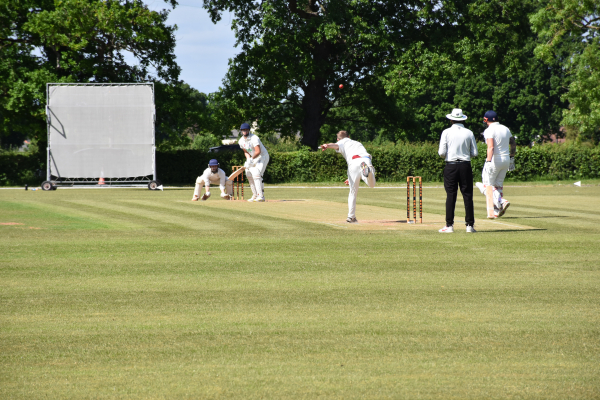 So we reach the penultimate games of the season with several issues going to the wire.

Barrow won the toss and Captain Glen Kermode elected to bat, he and Cameron McDougall made a good start putting on 50 for the first wicket. Greg Reynolds continued scoring a good 50. Preston do like to rotate their bowlers and Ali, Mehmood and Parvaiz each took two wickets apiece to limit Barrow to 213 for 6 in their 45 overs. An early wicket gave hope of win keeping hopes of an early return to the Northern League. However, an excellent stand by Preston’s outstanding players this season Navazish Ali (62) and Imran Mehmood (81 no) took them close to a win Suhel Patel (34) and Subair Patel 17 no saw Preston home by 6 wickets. The 4 wickets were shared denting  Barrow’s hopes.

Penrith won the toss and elected to bat on a good looking pitch and outfield. Nicky Burns (27) and Asher Hart with (46) gave them a good start and this was built on by Greg Cameron (39) and Sam Hall with ( 32) the tail did not support the good start and Penrith finished of 235 for 9. Jake Parsons took 4 for 59 whilst Millie Hodge and Joe Barker took two wickets apiece. Form would suggest that this was too high a total for Croston but Joe Barker with an excellent 93 no and a season highest score of 66 for Skipper Ian Dickinson caused some Penrith furrowed brows. It could not be sustained and Croston fell short by 14 runs. Wickets were shared with two apiece for Hart, Cameron and Glendinning.

Bob Bridges won the toss for Vernon’s and elected to bat. Fine 50’s by opener Matt Stevenson 50) and number three Jamie Rigby (56) they were supported by Wes Royle (38 no) and Ben Duerden with 21 no took the total to 187 for 3 in the 45 overs. There was not a lot of pace in the pitch but Stewart White took 2 for 30 in 9 overs. There is a bit more pace from Holland and Matt Timms who bowled well to take 7 for 52 from 15 overs. Jaimie Maitland was top scorer with 33 before pulling Timms square to Jamie Rigby who took a good catch. Young Ben Thomas took 2 for 8 of his 2 overs to end the game. Eccleston finishing  82 runs short.

Cleveleys opted to bat at the toss and it paid dividends when Jon Eade who is averaging over 37 scored another 78 aided by Jake Apperley with 40 and a match-winning 98 by young Josh Sackfield. Cleveleys scored 277 for 6 in their 45 overs. Seven bowlers were tried with limited success. In fairness the Fylde batting put up some gallant resistance with Will Smith (50 no), Michael Watkinson (40) and Dan Smith (66) taking them to 205 for 5. Cleveleys winning by 72 runs. Jez Newman took 2 for 41 in 11 overs. Fylde are relegated but there are some decent young players there. Hopefully, they can regroup and come again.

Captain Max Cowell – Makin won the toss and South Shore elected to bat. On a quick GE pitch, they had no real answer to the opening attack of Phil Booth with 5 for 22 and Jon Jefferies with 2 for 26. The Shore were hustled out for 76 in only 22.1 overs with no batter making 20. This included 20 extras. Rob Swale (24 no) and Alex Rhodes with (33 no) off 20 balls eased Eccy to an easy win. Neil Ashford took 2 for 35. A difficult season for South Shore we wish them well in Division 1A next season.

Anthony Wilson possibly looked at the depleted Penwortham team and elected to field upon winning the toss. Early success by Andy Hogarth put them on track but Martyn Brierly with 53 and Charlie Parker with 34 gave some hope, however, the skipper with 4 for 35 and Anthony Harrison with 5 for 33 skittled the rest of the batting. Penwortham being all out for 123 runs in 38 overs. A decent start by Michael Brooks ( 31) and Stephen Wright (33) gave them the advantage before Kirkham got the 124 for an easy 6 wicket win. The four wickets were shared. Hopefully, Penwortham will field a stronger side for the season finale at home to Vernon Carus.

This was a covid rearranged game. Barrow won the toss and elected to bat on the same track that had been used on Saturday.  Glen Kermode made a good start with 38 assisted by Cameron McDougall with 56. Left-hander Jack Singleton added a belligerent 58 to take Barrow to a decent 219 for 7 in their 45 overs. Millie Hodge took 2 for 38 and Jake Parsons 2 for 39. Croston offered little in response with only Joe Barker with 36 showing discipline to his batting. Croston were bowled out for a paltry 92 in less than 30 overs. Daryl Wearing with 4 for 33 from 15 overs, Sam Henderson with 3 for 37 and slow bowler Gary Collins with 3 for 14.  A very good win by Barrow which after yesterdays disappointment takes them to Penrith next Saturday still in with a chance of automatic promotion.